I think the five-year analysis for Vyxeos liposomal is very impressive. It shows step change improvement in survival outcomes in patients with quite high-risk AML, patients who are very difficult to treat, and patients who are in an older age bracket. And what it shows, I think, for the first time, is other than supportive care, which has been associated with improvements in outcome, which has been incremental, it provides survival data of benefit, in those patients that were treated with Vyxeos Liposomal. Particularly those who went on to receive consolidation therapy with a STEM cell transplant.

I think this really demonstrates from the maturity of the data, that Vyxeos Liposomal offers patients with secondary and high-risk AML the potential for cure when combined with allogeneic stem cell transplantation. We can see from these mature data that the improvement in overall survival is really maintained compared with conventional DA 3+7 induction.

With drugs such as Vyxeos Liposomal, we’re seeing an improvement in overall survival. We’re seeing safety that is equivalent to that of DA 7+3.  We’re seeing that more patients who are able to undergo post-remission therapy with allogeneic stem cell transplantation and even in those patients who are not able to go transplant perhaps due to age or due to lack of a donor, that in over half of those patients from the 301 Study their survival was over 12 months.

In the short term, there was a reduction in 30-day induction mortality and 60-day induction mortality. Most of this was because of better disease control early on, but that was in spite of a numerically higher rate of infection, partly related to a slightly longer time for count recovery. Other organ toxicities are between conventional daunorubicin, cytarabine and Vyxeos Liposomal are similar.

These data and the other data that we have on the efficacy and outcomes for patients treated with Vyxeos Liposomal have, I think, revolutionised the treatment algorithm for patients with high-risk secondary AML. I think it’s fair to say that these data are ground-breaking, they are game changing, they provide therapeutic options for these patients who otherwise had a very poor outlook indeed.

30% reduction in
relative risk of death
with Vyxeos Liposomal
vs. conventional chemotherapy1

What are you trying to achieve with your patient?

Median OS not reached with Vyxeos Liposomal
vs.
10.25 months with conventional chemotherapy1

OS from the date of HSCT1

Study 301 post-hoc analysis: OS in older adults with newly diagnosed high-risk AML who achieved CR or CRi but did not undergo HSCT4

OS in patients who did not receive HSCT4

Median OS in patients who achieved CR/CRi was
21.72 months with
Vyxeos Liposomal vs.
10.41 months with conventional chemotherapy

OS in patients who achieved CR/CRi1

60-day mortality due to
persistent or progressive disease
was lower for Vyxeos Liposomal
vs. conventional chemotherapy
(3.3% vs 11.3% respectively)3 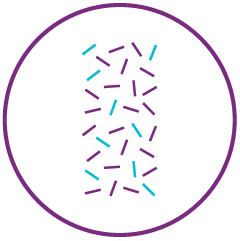 The Phase 3 study was a randomised, open-label, active-controlled study of Vyxeos Liposomal vs. conventional chemotherapy (7+3) in patients aged 60-75 years with newly diagnosed t-AML or AML-MRC2,5 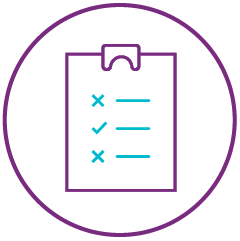 Patients were diagnosed with t-AML, de novo AML with MDS karyotype, or AML with a history of MDS and CMML with an ECOG PS between 0 and 22,5 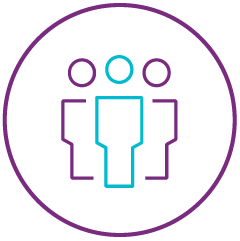 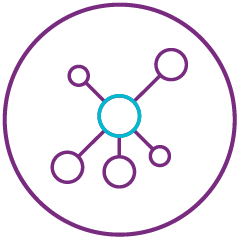 There were similar patient characteristics across both treatment arms2,5 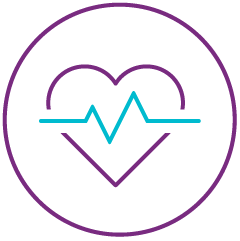 The primary endpoint of the study was OS. Efficacy was established on the basis of OS from the date of randomisation until death due to any cause.1,2 The key secondary endpoints were remission rates, event-free survival, safety, early mortality and remission duration2

Vyxeos Liposomal is the first dual-drug advanced liposomal formulation of daunorubicin and cytarabine designed to optimise efficacy of treatment2,6 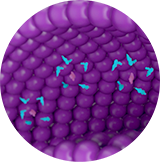 Fixed 1:5 molar ratio of daunorubicin and cytarabine within an advanced liposomal formulation5 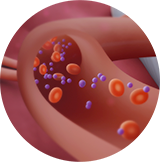 Synergistic molar ratio maintained for a prolonged period of time – over 24 hours after administrations5,7 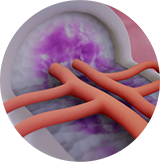 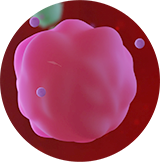 Dr Donal McLornan: So we’re now going to focus on therapeutic applications to lay the foundation for long-term remission in high-risk acute myeloid leukaemia as defined by therapy-related AML or AML with myeloid dysplasia-related changes.

These are my disclosures.

CPX 351 or Vyxeos Liposomal is the first licenced dual drug advanced liposomal formulation of daunorubicin and cytarabine, and it has unique properties.  It has a fixed 1:5 molar ratio of daunorubicin and cytarabine with an advanced liposomal formulation. Pre-clinical characterisation importantly has shown that the synergistic molar ratio is maintained for a prolonged period of time over 24 hours following administration.  Evaluation in the Rag2 murine leukaemia models has demonstrated that CPX 351 accumulates and persists in the bone marrow in high concentrations, and importantly that there is preferential uptake by leukaemia cells versus normal bone marrow cells again in leukaemia murine models.

Phase two data led rapidly to the generation of study 301.  So this was a phase three randomised, open-label multi-centre study performed across 39 centres in the USA and Canada, and it recruited quickly over a 23-month period from December 2012 to November 2014.  Key eligibility for this trial was that previously untreated patients as regards the AML, aged between 60 and 75 years of age, deemed by their physician that they were able to tolerate intensive therapy with a performance status of 0 to 2.  Various stratifications occurred within as regards their age and background disease.  They received one to two cycles of induction and if the patients achieved a CR or an incomplete CR, they were allowed consolidation of one to two cycles and primary and secondary endpoints were standard for a phase three trial looking at remission survival and safety

When we look at the disease characteristics, we can see that this is a high-risk group.  The mean age was 68 in both cohorts.  By definition, they were able to tolerate intensive therapies, so they had a performance status of zero to one in the vast majority of cases.  As expected, cytogenetic risk groups were predominantly intermediate or poor, and one in five in both cohorts had therapy-related AML.

I want to focus us on a case from our centre.  A 64-year-old lady who was attending her breast oncologist for follow up and was found to be neutropenic and thrombocytopenic.  Her previous therapy had involved combination chemotherapy and surgical approaches with mastectomy.  She had a good performance status, but unfortunately, her bone marrow aspirate revealed 28% blasts and conventional karyotyping revealed an 11Q23 rearrangement.  Her diagnosis is one of therapy-related acute myeloid leukaemia.  She was admitted to our unit for treatment following organ assessment with Vyxeos Liposomal®.  This was administered on days one, three and five.  She tolerated her first course extremely well, complicated by one episode of febrile neutropenia which responded to empirical antibiotics and grade two diarrhoea, which was self-limiting.  Her counts recovered on day 35.  She had gained full haematological recovery, and bone marrow revealed that she was in complete remission.  Subsequently, she was admitted for a second course on day one and three and recovered her counts at day 32.

When we look at the first evaluation of survival with a median follow up of 20.7 months, we can see that Vyxeos Liposomal was the first licenced chemotherapy to significantly increase median overall survival versus standard 7+3 for those with high-risk AML.  And we can see that the median survival at this first evaluation was 9.6 months for Vyxeos versus less than six months for 7+3.  Importantly, there was a 31% reduction in the risk of death for patients treated with Vyxeos versus 7+3.

So what about the ability to achieve the endpoints of complete remission or compositive endpoints of CR plus CRi? Here we can see that for CR it favoured Vyxeos over DA3+7 and for the composite endpoint of CR plus CRi, 48% of patients achieved this with Vyxeos Liposomal versus 33% with standard DA7+3.  And importantly for this group of patients, who are a high-risk group, the ability to achieve the compositive endpoint of CR plus CRi after one induction cycle was over 55% for Vyxeos compared to over 44% with DA7+3.

What about early mortality rates? We can see that for all-cause mortality at day 30 it favoured Vyxeos and importantly for the two-month mortality, so day 60 mortality when we compare Vyxeos to 7+3 we can see that the 60-day mortalities are usually adverse events, was comparable between both cohorts.  But importantly focusing on either persistent or progressive disease, it was markedly lower for Vyxeos at 3.3% versus over 11% for those patients treated with 7+3.

So, what about the safety and the initial report from the trial? Focusing on the safety aspect, we can see that there were a similar type of adverse reports recorded.  The proportion of patients in each cohort affected by these adverse events were similar.  And if we focus on the yellow coloration on the chart, looking adverse events grade 3 to 5 we can see that for both cohorts, these incorporated febrile neutropenia as expected, pneumonia and hypoxia.

So cycling back towards our patient, she achieved CR after induction course one.  She subsequently, after her second course, underwent a matched unrelated donor stem cell transplantation using our standard platform of fludarabine, busulfan and alemtuzumab.  Her post-transplant course was complicated by one episode of sepsis.  She had timely neutrophil and platelet engraftment.  She achieved full donor chimerism, and she now is well with no evidence of graft versus host disease and is fully off immune suppression.

And when we focus back to the type of patient that was included in this study and thinking about laying long-term foundations for remission, certainly the stratification of therapy upfront is an optimal approach.

So what about patients who did achieve remission in the 301 study but did not undergo transplantation.  Here we can see the overall survival plots for patients who achieved CR or CRi but did not subsequently undergo transplantation.  The number of patients who achieved that composite endpoint was 73 in the Vyxeos cohort versus 52 in the 7+3.  Treatment with Vyxeos improved median overall survival.  In this subgroup analysis of patients who achieved these endpoints but did not subsequently undergo transplantation and importantly for this high-risk group, over half of those who received Vyxeos liposomal survived beyond one year.  And when we think about safety, the safety profile of Vyxeos liposomal in this subgroup analysis was consistent with the overall study population and the known safety profile of 7+3.

So I would just like to conclude by many of the factors that us within the AML and transplant community have to consider about how we improve transplant long-term outcomes for patients with acute myeloid leukaemia focusing on prolonged remission or surrogate cure.  There are many aspects to the transplant procedure itself.  How we predict and manage relapse and also how we manage the post-transplant period as regards, monitoring and I think we’re getting better at that but importantly, when we think about what we can do with our patient who walks in the door up front, is focusing on correct therapeutic stratification.  So picking the correct therapy for that patient with high-risk acute myeloid leukaemia which hopefully leads to higher rates of CR, improved depths of response, improved tolerability and that is one way that we in the community can lay the foundation for prolonged remission.

In conclusion, identifying high-risk features of AML at diagnosis is mandatory both for prognosis and correct therapeutic stratification.  This will potentiate reasoned therapeutic choice and longer-term strategies.  Particular subsets as I hope I’ve shown you over the last 15 minutes, to recognise the correct approach to are those with therapy-related AML and AML MRC with the use of Vyxeos Liposomal, and we can see long-term five-year data from the 301 study including in the post-transplant period.

I think moving forward both with AML and with stem cell transplantation these novel chemotherapeutics potentially in the future combined with targeted agents and the correct immunotherapeutic platforms for transplantation will lead to improved survival for our patients.  Thank you. 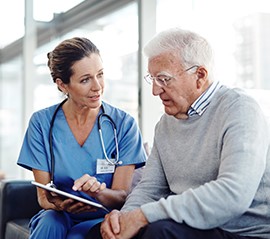 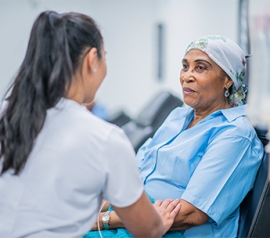 *High-risk AML is defined as therapy-related AML or AML with myelodysplasia-related changes.

This site has been created for healthcare professionals only.

YES, I AM A UK HEALTHCARE PROFESSIONAL

NO, I AM A MEMBER OF THE PUBLIC, OR A PATIENT